Gertrude Ederle – The First Women to Swim the English Channel

Gertrude Ederle’s accomplishments were not only in the water as an Olympic swimmer and the first woman to swim the English Channel. She also had a huge impact on the fight for gender equality in sports, and her acts inspired generations of sporting women after her.

The English Channel is part of the Atlantic Ocean that separates southern England from northern France and links to the southern part of the North Sea by the Strait of Dover at its north-eastern end. The straight-line distance which swimmers must complete is about 34 km, with water temperatures peaking at 20C in the summer and dropping to 5C in the winter. Even today, swimming the channel is one of the toughest endurance tests in the world. However, in 1926 at the age of 20, Gertrude Ederle became the first women to complete the swim. In doing so, she also broke the record previously set by a man – Enrique Tirabocchi.

Ederle was already an accomplished athlete when she first attempted the Channel swim. As a professional swimmer, she had seen success at an international level. This came at the 1924 Olympic games in Paris, where she won a gold medal with the relay in the 4 x 100 freestyle and bronze medals in 100m and 400m freestyle. However, the English Channel swim was a much greater task.

Ederle’s first attempt to swim across the Channel was in 1925, but after 9 hours she was pulled out of the water by her coach due to frigid and turbulent waters. This was a tough lesson for young Ederle from which she was committed to learn from. The swim was more than personal for her. Not only she was fighting to complete the distance, she knew that that this represented more than just a sporting challenge. At the beginning of 20th century, the 19th Amendment to the US Constitution was ratified and women officially got the voting right. This time-period was historically significant for women all over the world as it started the era of the independent women, who were prepared to stand for themselves and show the world that women deserve to be treated equally.

After failing to cross the English Channel the first time, Ederle was determined to do it again.  She focused on her training and learning about the currents and acclimatising to the cold. Many people did not believe she could make it but she never doubted herself. On the morning of August 6th in 1926, Ederle set out from Cape Gris-Nez in France to attempt the swim again. After 14 hours and 34 minutes from when started in France, Ederle completing the crossing when she arrived on the English shore of Kingsdown, Kent. However, she not only became the first women to complete the swim, but she also broke the existing record of 16 hours and 33 minutes set in 1923 by the Argentine swimmer Enrique Tirabocchi.

About 4,000 Britons greets her on the shore, filled with the excitement and joy. They knew they were part of sporting history and that the story of Ederle will be passed from generation to generation for many years. People on the shore did not care if Ederle was an American, they just cared about the incredible distance she covered. Women and men welcomed her ashore where they celebrated a victory for all humankind. Ederle was later inducted into the International Swimming Hall of Fame.

“I had achieved my one ambition by crossing the English Channel.”

Sadly, the Channel swim significantly worsened her hearing, and she retired from swimming competitively in 1928 aged just 22. After that, she was toured around British towns giving swimming demonstrations and instructions. She also appeared in a short film about her life and career. In 1933, she suffered from a severe back injury and she was never able to compete again except at the “Aquacade” attraction of the 1939 New York World’s Fair. However, later in life, she went on to teach swimming to deaf children and passed on all the wisdom she had gained through years of training to the younger generation at the Lexington School for Deaf.

She passed away in Wyckoff, New Jersey, in 2003 at the age of 98. They named a recreational centre – Ederle Recreation Centre, which is complete with a pool that features her name on the Upper West Side of Manhattan. The location has a significant meaning since the centre is located not far from where she grew up and first learned to swim.

Lessons To Be Learned

No one can describe Ederle’s achievement better than Heywood Broun did in an article for the New York World:

“When Gertrude Ederle struck out from France, she left behind her a world which has believed for a great many centuries that woman is the weaker vessel. Much of government, most of law and practically all of morality is based upon this assumption. And when her toes touched the sands of England, she stepped out of the water into a brand-new world.”

Ederle showed that with determination and focus, a woman can achieve whatever her heart desires and whatever her mind determines. She showed that women should be presented with the equal opportunity and that they should not be underestimated. With her acts, Ederle empowered many girls in understanding their rights and to take pride in participating in sport.

Sports is hugely powerful in shaping norms and stereotypes about gender. However, we all have the ability to challenge these norms by promoting women and men in sport equally – irrespective of gender. We should learn from the actions of those like Ederle, and strive to make sport a safe, inclusive, and respectful experience for all the people of all genders. 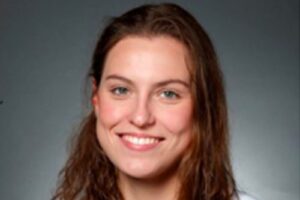