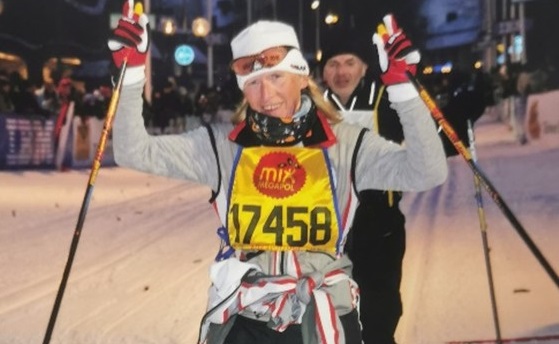 The Vasaloppet Marathon is the most prestigious marathon among cross-country skiers. The event takes place in Sweden and is over 90 kilometres long in very demanding conditions. Success for the runners is simply to successfully complete the marathon as it is an extremely difficult trail. Even with light descents, a large number of falls occurs due to muscle exhaustion.  As a result of the falls, there are many drop outs and injuries.

The Vasaloppet Marathon was first held in 1922 and will celebrate its 100th anniversary next year. It is attended by more than 15,000 competitors both men and women. The first woman to perform was Margit Nordin in 1923. However, after the end of the competition, women were banned from performing because they believed that women were too fragile for such a demanding competition. In addition, there was a belief that due to the participation of women, the marathon would lose its reputation for the most prestigious and demanding trials. During the 56-year ban, several women disguised as men tried to compete, proving that they were strong and that women should be allowed to compete as well – among which was Nevenka Omerzu (then Popovič).

“It is necessary to insist if you want your wishes and dreams to come true. If you really want something, you will achieve it and do it, because these things always somehow find you, like the opportunity to participate in Vasaloppet found me.”

She started training cross-country skiing in the 1st year of high school when she was 16 years old. Since then, cross-country skiing has been her life. Her biggest wish was to be able to compete in the Vasaloppet marathon; however, women were not allowed to compete at the time. In 1979, she infiltrated as a male racer and participated in a different 90-kilometer marathon in Germany. At every snack bar, they were happy to see her and offered her everything they had to help her to make it to the end. She successfully completed the marathon. However, her desire for Vasaloppet still remained. In 1980, as fate would have it, that wish came true.

At that time, countries were given quotas on how many runners they could have in the Vasaloppet marathon. Yugoslavia was given a quota of 10 competitors, but due to the ban of women competitors, Ms. Nevenka was not included. However, one of her friends who was selected could not run the marathon as he was employed in law enforcement and had work commitments at the time of the race.  Because everyone knew that Nevenka desperately wanted to compete in the marathon and that she was very good (even better than some men), they invited her to join the team. So, she went to Sweden with them to participate in the 57th Vasaloppet Marathon – where the real challenge only just begun.

Even before the competition, she encountered disapproval. They lived in an apartment whose owner was against any participation of women in the marathon. When he asked her if she would run too, she had to lie. She replied that she came to support the boys by cooking for them and to help them with English because they did not speak it well.

On the day of the marathon, she signed up with her brother’s name. At the start, she was subject to strict control – which she successfully passed. She prepared an artificial moustache and beard from hair cut from 8 Slovenian competitors who were with her at the competition. She also used a corset to change her physique. She also spat a lot so her performance for the control process was even more convincing.

At the start they waited for 1 hour because there were around 12,000 competitors. While waiting, a problem occurred. All the bearded runners got frostbite on their beard during the severe cold, but because of the use of the glue, she did not. She had to bend over and hide all the time so that no one would suspect that something was wrong. She did not dare to use the toilets, because at that time they did not yet know modern portable toilet cubicles. As well she did not dare to stop at the snack bars, because girls who had also tried to reach the finish line in the past, were mostly eliminated there. She stopped just once to try their famous blueberry soup, which is the trademark of this marathon. Throughout the whole marathon, she only drank 200ml of juice so she was able to avoid stops and thus reduce the chance of anyone discovering the ploy. After 90 kilometres, she successfully avoided all intermediate controls and crossed the finish line in 8135th place, finishing ahead of 1/3 of the male participants.

“From somewhere something always comes, when you least expect it, you just need to be persistent.”

In the end, the commission found out the secret. Swedish newspapers wrote quite a lot about her and her case. Stockholm newspapers supported her. But a Falun newspaper, which is close to the marathon, demanded unconditional disqualification. The matter was resolved by giving her a diploma in her brother’s name. However, the publicity of her case helped create awareness  for the women’s cause, and just one year later at 58th Vasaloppet marathon, women were granted approval to take part in the race. On that day, 73 women competed and were given their own start time. In 2010, Nevenka returned to the marathon 30 years after her first venture, but this time as a woman and with her real name.

Today, she teaches physical education in high school Gimnazija Šentvid, teaches cross-country skiing and participates in the organization of World Cups. Mrs. Nevenka also worked as a coach and was very successful and worked and helped at Winter Olympics games in Sarajevo 1984, which in her words was amazing experience. Because of all her knowledge and experience, she is now also a member of the organizing committee for the 2023 FIS Nordic World Ski Championships. Till this day, she still fondly remembers the competition at Vasaloppet today.

“It is my pride and recognition that I managed to change the mentality in sports and open it to athletes regardless of gender.”

Mrs. Nevenka and other exceptional women, thank you for fighting and thus enabling other women to get involved in sports and competitions.