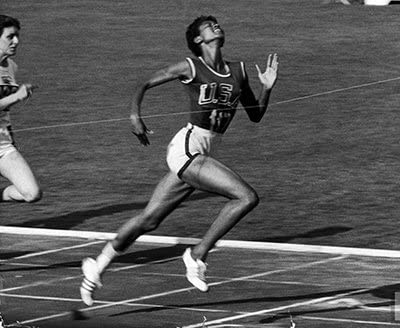 Notwithstanding her recognition as an outstanding sprinter, her name may not be familiar to those outside of athletics. Nevertheless, her personal and sporting actions both in society and in athletics cannot be overlooked. This is the story of Wilma Rudolph:

Rudolph was born prematurely on June 23, 1940, in St. Bethlehem, Tennessee, United States. She became a pioneering African American track and field champion, but the path to victory was not an easy one for Wilma. Affected by double pneumonia, scarlet fever, and polio as a child, many doctors felt she would never walk again and due to her illness, she had to wear a brace on her left leg. However, she always believed otherwise and at the age of six, Rudolph began hopping on one leg.

By the time she was 12, she had regained her ability to walk and took up athletics. But it was with great determination and the help of physical therapy that she was able to overcome her disabilities. Then, Wilma quickly turned to sports, becoming a natural athlete and her mother discovered her playing basketball outside. Subsequently, she attended the all-Black Burt High School, where she continues playing on the basketball team.

The result of perseverance and not giving up

Her natural talent for running was being revealed so she was soon recruited to train with the Tennessee State University track and field coach. Later, Rudolph qualified for the 1956 Summer Olympic Games in Melbourne, Australia, being the youngest member of the U.S. track and field team at age 16 and she obtained a bronze medal in the 400-meter relay.

“I loved the feeling of freedom in running, the fresh air, the feeling that the only person I am competing with is me.”

Four years later and after training very hard, at the 1960 Olympic Games held in the capital of Italy, Wilma headed with great determination to get gold. First, she tied a world record with her time of 11.3 seconds in the 100-meter semi-finals and then she won the event with her wind speed mark of 11.0 seconds in the final.

Consequently, Rudolph became the first American woman to win three gold medals in track and field at the same Olympic Games. The outstanding sprinter instantly became one of the most popular athletes of this Games as well as a worldwide superstar, acclaimed around the globe for her unprecedented achievements. She was dubbed “The Black Gazelle” by theEuropean press for her speed, beauty, and grace.

Following the Rome Games, Wilma made several appearances on television and received numerous honours, including the Associated Press Female Athlete of the Year Award in both 1960 and 1961. In 1962, Rudolph retired from track and field, she went on to finish her degree at Tennessee State University and began to teach and coach. She also continued her contribution in sports, working in various community centres in the U.S.

She shared her noteworthy story with her 1977 autobiography, which later that year was the subject of a prime-time television movie. In the 1980s, she was inducted into the United States Olympic Hall of Fame and established the Wilma Rudolph Foundation to help amateur track and field stars.

In 1990, she became the first woman to be given the National Collegiate Athletic Association’s Silver Anniversary Award. In addition, the indoor track and dormitory at Tennessee State University are named in honour of her and in 2004, the United States Postal Service commemorate the Olympic champion by featuring her likeness on a 23-cent stamp.

Rudolph is remembered as one of the fastest women on the track and field and as a great source of inspiration, especially for athletes, disabled people, and women.

“Winning is great, sure, but if you are really going to do something in life, the secret is learning how to lose. Nobody goes undefeated all the time. If you can pick up after a crushing defeat, and go on to win again, you are going to be a champion someday.”